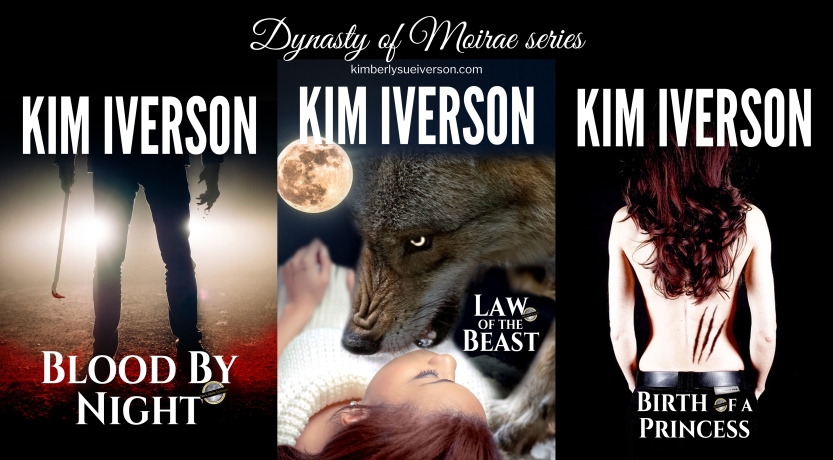 No matter how hard we try to escape the fates, the Moirae will have their way. We can run, we can refuse, we can fight, but in the end fate always has its way. In the Dynasty of Moirae series from writer Kim Iverson, you’ll find that no matter how immortal-like you are, no matter how many magical gifts you possess, no matter how much you may alter your DNA, you can’t escape the fate you chose before you walked this earth. And above all else, love is the weapon above all others to wield.

Dynasty of Moirae series is part of the Dark Moon Dynasty Universe. At the bottom of this page you’ll find all the books connected to the DMDU world.

Kylarra Knox and Verrick Conrad have a tumultuous relationship. We begin to get to know just how much restrained passion lies within the two for the other, but also how far Kylarra will go to deny such a connection, as well as Verrick when it gets too deep and connected. Fate has plans for both of these people . . . er, Lycaen. At least, that’s what Ky has believed all her life. That she was Lycaen. She is Lycaen, right?

Law of the Beast

Verrick Conrad believe Lycaen should rule over human, he believes in running things with ancient ways, and his pack and he are anything but gentle about imposing their beliefs. In such close quarters, Kylarra is unable to deny how such laws affect her. For the good . . . and the bad. Another character makes an appearance from another series too, only to have Kylarra questioning everything she was ever taught, and knew. Just what is fact, what is fiction?

Birth of a Princess

Things are going crazy left and right. Kylarra’s best friend is missing, things are turning upside down in her life, she doesn’t know which way is up, and it just keeps getting worse. Now? Now she doesn’t know who she is and worse . . . the ones who should’ve always been truthful to her, she thinks are lying. Things are happening in her she doesn’t understand, she has nowhere to turn until . . . she finds a calming presence in a man she relates to in another series that isn’t Lycaen. He’s . . . a vampire. How is he so familiar to her? Find out what happens when fate decides a Princess needs to be born.

Start with Blood By Night

Get these posts sent directly to your inbox

Leave your mark - comments are moderated. Once confirmed you're not spam, it'll be approved. Cancel reply

This site uses Akismet to reduce spam. Learn how your comment data is processed.